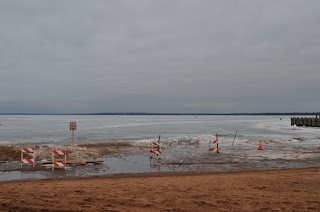 Will there be a ice road this year or not? It would have to be plenty cold for a string of nights and so far that isn't looking likely. But it's early? You never know? Last year the road opened for a very short period.
Posted by Bayfieldwis.com No comments:

This is the screen shot of the aurora at midnight in Bayfield. So far nothing reaching Bayfield which is good as it's very cloudy tonight and we wouldn't be able to see it anyway.There was a big solar flare on Monday.
Posted by Bayfieldwis.com No comments:

Ice in the Channel 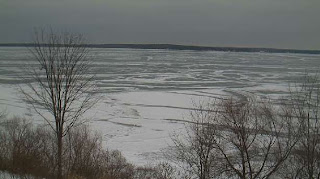 It looks like winter now with the channel frozen between Bayfield and Madeline Island. The ferry is breaking ice and still running for now. I doubt there will be a ice road this year unless February is very very cold.
Posted by Bayfieldwis.com No comments: 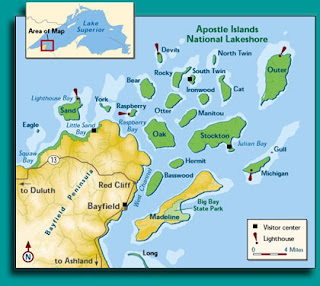 Five Apostle Islands Lighthouses To Be Restored.
The National Park Service's largest and oldest collection of lighthouses is due to get a major facelift. Five of the six light stations in the Apostle Islands National Lakeshore will undergo some restoration. This is the most ambitious preservation effort in the Apostle Islands. It'll begin this spring and end in 2013, restoring and repairing not only the lighthouse towers but also many of the out-buildings where lighthouse keepers lived with their families.
As big as it is...to the tune of $7 million...Apostle Islands Lakeshore Superintendent Bob Krumanaker says they'd need twice that amount to get everything restored.
"We have no prospect of seeing that for the foreseeable future, and we knew that," he says. "So, we very carefully said 'Okay, what is the most cost-effective first increment of that using the available money? Let's not leave any light station half done."
So work will range from complete interior/exterior work to simply shoring up structures.
The six light stations with eight light towers range from the 1850's to 1900. Park Historian Dave Cooper says this is a challenge because no structure is the same.
"You've got an 1856 masonry tower and building on Michigan Island which represents one of the earliest lighthouse designs," he says.
Cooper says they'll save as much original material as they can. The $7 million federal grant was awarded in 2009, but it took more than two years to draw up designs to get to the actual work.
About the Author
Mike Simonson
Wisconsin Public Radio
Posted by Bayfieldwis.com No comments: 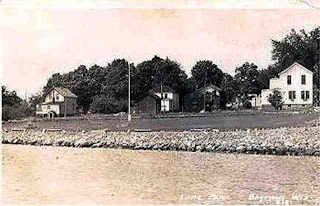 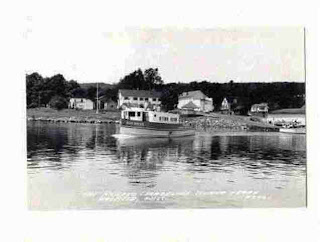 The Bayfield waterfront looked very different in the 1940’s and 1950’s.
These old postcards show it very well.

This isn’t a political forum or will it ever be but I think it’s VERY telling today that when the recall Walker people turned in thousands of petitions that Scott Walker was in Washington raising money for his campaign with the former crooked AIG President.
You can be judged by the company you keep.
Posted by Bayfieldwis.com No comments:

For gosh sake get some rest! 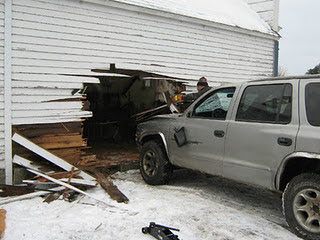 Article | January 16, 2012 - 12:51pm | Ashland Current
The driver of a Dodge SUV that crashed into a building in Washburn on Friday likely fell asleep at the wheel, according to Washburn Police Chief Ken Johnson.

No one was injured in the crash, including the SUV's driver, David Renz, of Washburn, according to Johnson.

On Friday afternoon, the SUV hit the building at 136 W. Bayfield St., smashing through the walls on both the north and south sides.

“(Renz) said he believed he fell asleep,” Johnson said. Driving under the influence was not a contributing factor, he said.

Renz was headed south on Bayfield St. when he crossed into the northbound lane before hitting the building, Johnson said.

Johnson said Renz could be cited for inattentive driving, though Johnson said he didn't know whether the investigating officer issued a citation as of Friday.

The building's owner, Bill Rohling, had plans for opening an antique store this spring. Rohling bought the property eight years ago and has been steadily making improvements, such as refinishing the floors and painting the storefront, Rohling said on Friday.
Posted by Bayfieldwis.com No comments:

Winter at last! Which brings a runoff on the road and a frozen Houghton Falls. They always say snow causes runoffs in the newspapers. But I say drivers cause the runoffs so don't blame
the snow. Houghton Falls Nature Preserve opened this year officially. South of Bayfield off of Highway 13 before Washburn. 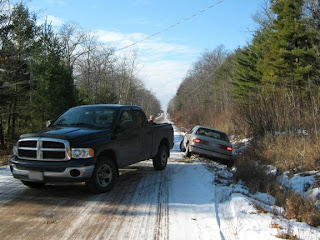 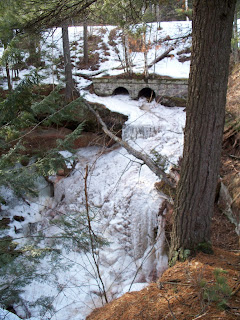 Store has a Grand Opening in Washburn.

Some excitement in Washburn as a building has a unplanned Grand Opening. Not sure how the mishap occured and if it was due to the snow or just a driver going too fast? Either way a local contractor will be getting some work soon. I like the fellow standing in the first picture.What the heck has gone on here is his body language. 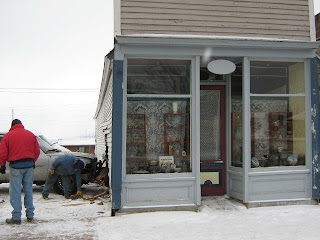 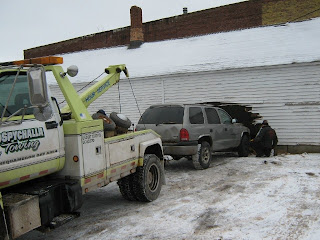 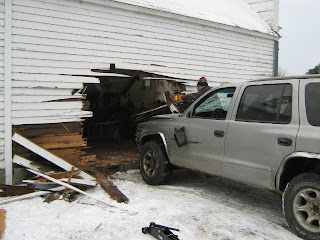 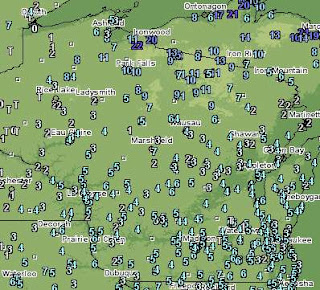 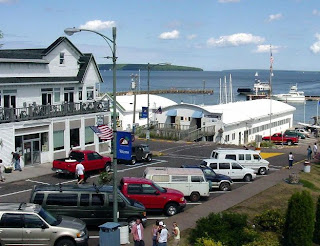 At last the entire State has some sort of snowfall. Duluth Minnesota however has nothing!

I found a old postcard of the Pier Restaurant. I recall it well but not sure when it was first built. Judging by the cars in the postcard it was the early 1960’s? Also a current picture of the corner on a fine July day. We can think of July now that we got some snow. 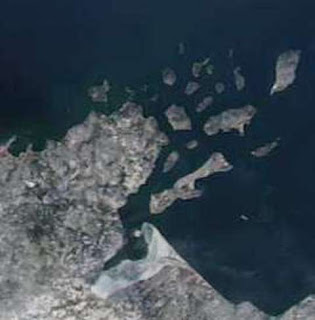 The daily fly over of the Satellite shows ice in Chequamegon Bay but for how long? We have had a very warm winter to date. I wonder if the Madeline Island Ferry will even stop running this year? It would be a bit risky to venture too far out on the ice for fishing. Some do however! 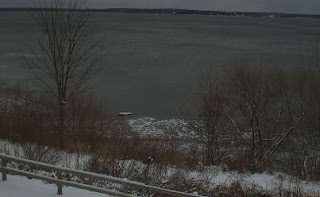 Snow at last in Bayfield, about 3-4 inches. Still very warm this winter and the channel between Bayfield and Madeline Island is wide open. Which brings the question, will the ferry run all winter this year? I believe last time it operated all winter was 1998? That was a El Nino winter. We now have what is called a La Nina winter. The jet stream is way north of where it should be and we have warmer air then we should in winter. So far this winter anyhow. Who knows what is to come? I’m not sure the computer models have it right but all of it is very interesting to follow. I of course think the Weather Channel is one of the greatest things on TV so that speaks volumes.
Posted by Bayfieldwis.com No comments:
Newer Posts Older Posts Home