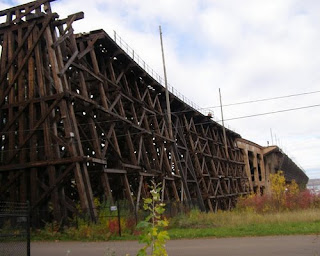 
The demolition process of the Ashland ore dock is underway. Workers are putting up wire mesh barriers to prevent peregrine falcons from nesting on the 1800 foot long dock. Joe Cadotte reports.
Plans to take down the 94 year-old Ashland ore dock last summer came to an abrupt halt when the Department of Natural Resources discovered three young peregrine falcons nesting on the concrete/steel dock. Ashland Mayor Ed Monroe says workers are now using a 120 foot lift to reach the falcon nesting sight.
“They’re going to put up a lot of wire mesh just to keep the falcons from flying into where they would be nesting. But the whole time that they’re down there working there was one of the falcons sitting on one of the ore shoots watching him very intently, wondering ‘What the heck are you doing to my house?’ They’re not nesting yet, but they’re definitely thinking about it.”
The nesting falcons are just one of several barriers to tear down the ore dock. February the D.N.R. found evidence of fish habitat under the docks. And the intake for Ashland’s water supply is less than a quarter mile away from the ore dock. After four years of planning, Monroe is confident the demolition process won’t hurt the environment. He doesn’t think there’s opposition to raze the ore dock.
“I don’t think opposition. I think concern, just a sadness that something that’s been with us for so many years is going to go.”
Beginning in late May or early June the Ashland Ore Dock will be demolished one piece at a time by jackhammer.
It could take up to three years but Ashland Mayor Ed Monroe says the 1,800 foot ore dock needs to be taken down as carefully as possible.
“We pull lake water in, over a million gallons a day to supply the needs for the city. You’ve got everything from asbestos materials to lead paint issues coming off the dock. What if we detect these materials getting into our drink water?”
Monroe says demolition of the Ashland ore dock has been his priority since an incident happened more than four years ago.
“A piece of the concrete fell off and narrowly missed a child that was on the trail down below. And we petitioned the state. People are out of the dock all the time and it’s just a matter of time before someone gets hurt. We’ll remove than hazard from our community.”Monroe says the community will miss the ore docks.
“The dock itself is just a massive presence when you come in to the town. Watching the ore dock come down is going to be heart wrenching. Everybody loves the dock and presence that it’s got there. It’ll be a sight to see. The sadness of watching an old land mark go is one thing. But you can say you were here when it happened. And the pictures that you take and the memories that you have of it I guess we’ll take with us forever.”
Posted by Bayfieldwis.com 1 comment: 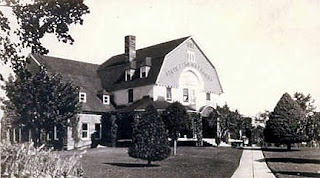 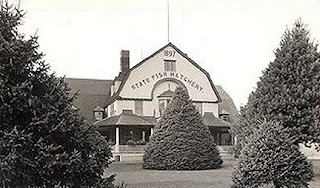 Back in my Grandmother's early days she recalled that it was very popular to picnic at the State Fish Hatchery. The grounds were always well kept and garden like. You had your picnic and then toured the hatchery. Bayfield Hatchery is still open to the public and has events for kids each year. The Bayfield Hatchery is just south of town on HWY 13. 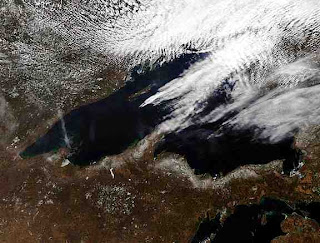 Viewing today's satellite shot you can clearly see Cheaquamegon Bay and the ice.
It's always fun to do the guessing game on what day the ice will go out. Depends on the wind mostly. It has to be very weak right now after all this warm weather.
Posted by Bayfieldwis.com No comments: 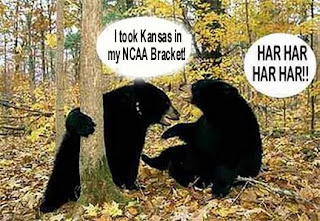 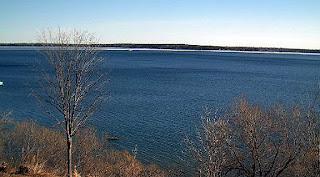 It's early and perhaps the warmest March in recent times? The ice went off the Channel and the ferry is running. Still some ice on Chequamegon Bay. The animals are out and about. A few Robins have been spotted. Last time I recall this early of a spring was Easter 1998 with the last big El Nino event. I ordered a kayak spray skirt the other day so summer is on the mind. Kids mentioned they want to hike to a remote waterfall. Everybody is way ahead due to the weather with plans for spring and summer.
Posted by Bayfieldwis.com No comments: 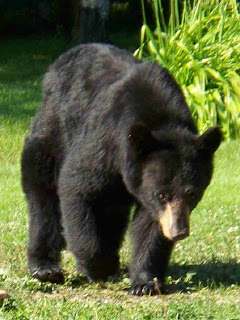 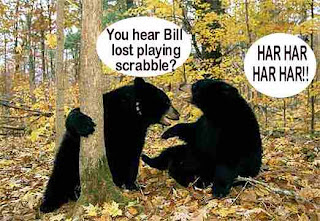 Bear scat has been spotted in the woods! This is a early sign of spring, they are out and about and likely very hungry. Last year I spotted more bears then all of the previous years combined.
I'm looking foward to some evening bear tours looking for that big bruin.
http://www.bear-tracker.com/blackbearscat.html
Posted by Bayfieldwis.com 1 comment: 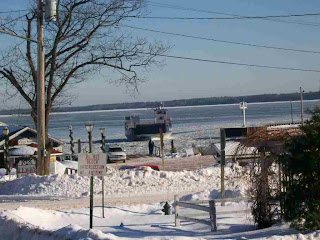 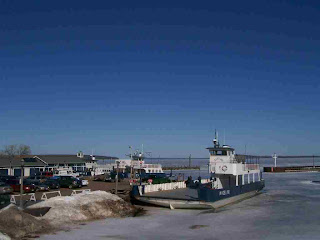 The ice softened with the warm weather and the ferry busted it's way to Madeline island.
It took hours but a river of water is open.This is very early but not really sure how early? The records would be interesting to view. I know one year it ran all winter. That might have been 1998?
http://www.madferry.com
FOX 21 News

BAYFIELD - Just one week ago, cars were traveling the ice road between Bayfield and Madeline Island. But thanks to the recent warm, wet weather, ferry boats are now making the trip.

The Madeline Island Ferry Line's Web site says the Island Queen made that first trip of the season Thursday through the broken–up ice. The trip took three hours.

It ends three weeks of wind sled and ice road traffic. The ice road was closed last weekend after just one week of operation. 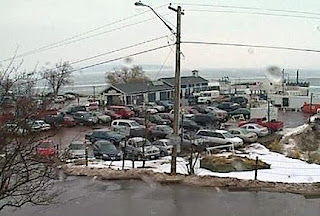 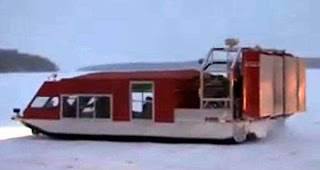 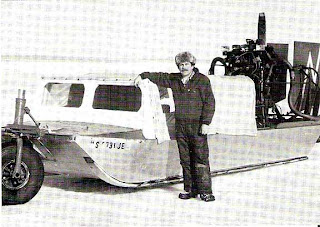 The ice road closed after only a week. So it's back to the ice sleds until the ferry can break ice and make a open path to the island.
Which may be soon at these temps! The weather is certainly warm for March. All of Lake Superior is wide open except for the channels and bays near land.
All the cars are parked in the Ferry Service parking lot so they can be used by the island residents when they come across on the Wind sled. Pictured is the newest Wind sled and the old style sled. Looks like a aircraft landing wheel on the front to aid steering. 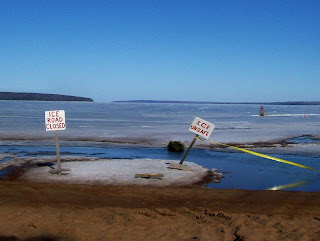 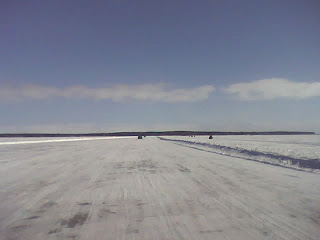 Well it made it for a week and the Winter Carnival. The road couldn't survive the 40 degree temps for long. The forecast may be the end for the rest of the season. Unless a arctic miracle happens! They are also talking about the first ship might leave the Duluth harbor on March 19th. This is a early start to the shipping season yet again. 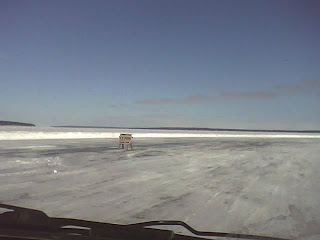 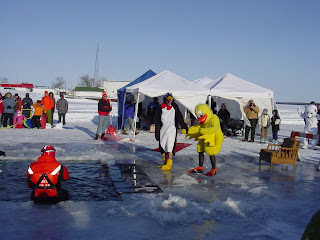 It's time for diving ducks doing polar plunges and one last chance for the ice road. I believe the ice road won't last long with the present forecast in the 40's. There is a pressure ridge not far from shore that is causing problems. But last reported it was 16 inches thick which is plenty.

The polar plunge is always entertaining to watch.