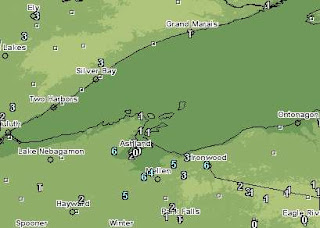 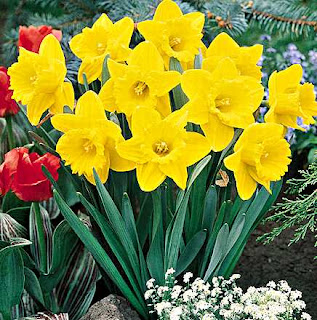 Spring is coming and the flowers will bloom. Meanwhile the snowbelt near Hurley and Montreal have snow on the ground. Bayfield got about a inch of slushy snow which has melted. 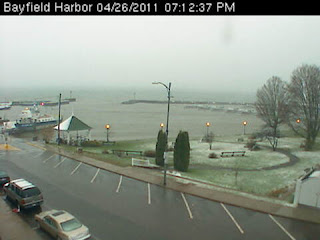 Not quite yet but the flowers are making a effort. But first we have to get the snow to stop falling and spring to last more then a single day at a time. Yes that is snow on the live cam on April 26th. While not unheard of it's still late. Why the live cam? Because I'm warm in the house on my computer that's why!
Posted by Bayfieldwis.com No comments: 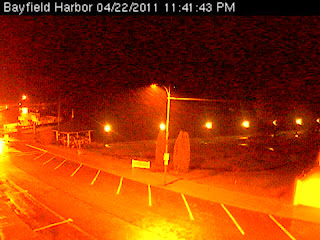 Not unheard of but still unwelcome. Just think of it as moisture for spring flowers......


I shouldn't have even mentioned that hopefully that last weekend was the last snow. So it's my fault that right now there is light snow on April 22nd just before Midnight. Thankfully it's melting as it hits the ground.
Posted by Bayfieldwis.com No comments: 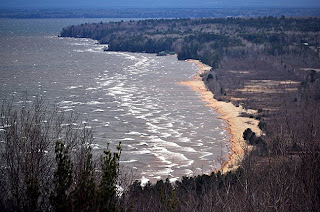 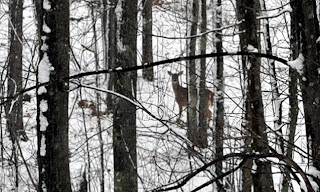 Last weekend in Bayfield was windy,snowy and sunny. It was a bit of everything all in one weekend. I enjoy weather so it was all a positive to me. But I'm certain that folks are hoping it's the last snow seen until next fall. The wind was blowing in some nice waves on Bayview Beach and a lone deer was in the snowy woods looking for a handout. The bears are being reported in the area on porches and in a garage. time to keep the door shut and make sure there are no bird feeders hanging from porches. They seem to find them no matter where they are hung. They are really interesting creatures with the best sense of smell ever. I read they can smell something good to eat three miles away. I hope to see one again this spring. Last year I saw a monster of a bear that really took me by surprise when I looked up from the smaller female that was grazing in the ditch. The big bruin was just at the edge of the woods looking down the bank.

When bears first come out from hibernation I read they like to eat grass as other food sources are still hard to find. That is the reason they come into town looking for good things to eat.
Posted by Bayfieldwis.com No comments: 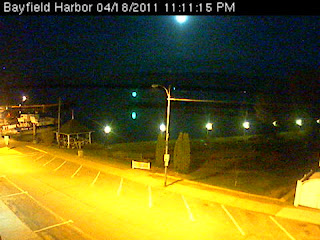 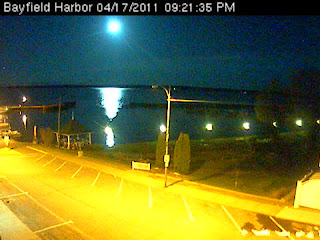 Last night the moon was shining strong and making it look like daytime on the Bayfield harbor.
Tonight is the full moon. The channel is magical during the summertime with the moon on the water on a calm summer night. Get some ice cream this summer and walk down on the city dock and take a look if you time your visit on the full moon.
Posted by Bayfieldwis.com No comments: 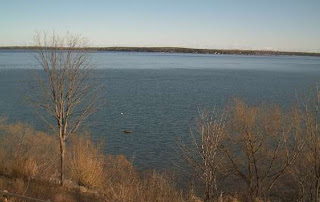 The channel is opening up rather quickly now. The weather is very spring like and nice.Sadly towns in central Wisconsin were hit by tornadoes during the weekend and it's a rough thing to see happen to people. Many homes destroyed. In other areas spring flooding. Makes you really understand how lucky we are not to have these problems.
Posted by Bayfieldwis.com 2 comments:

One last look at the ice road 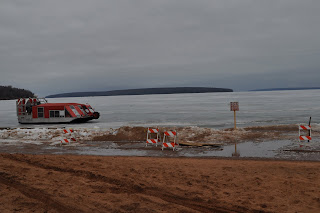 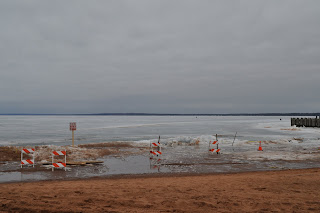 Taken just a short time ago is the windsled parked and ready to go on what remained of the ice road. I don't know of anyplace else that has such a unique mode of transport. The ferry has been going back and forth now for awhile. The ice is getting thin and should blow out pretty soon in the area.
Posted by Bayfieldwis.com No comments: 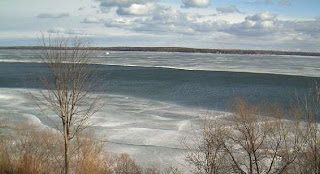 Won't be long now, the channel is opening up slowly. Photo courtesy of Seagull Bay Motel live cam. The motel with the best view in Bayfield.
Posted by Bayfieldwis.com 2 comments:

This mornings satellite shot showed ice holding tight on Chequamegon Bay and in the West Channel between Bayfield and Madeline Island. When will the ice go out? In the picture below you can see the remains of the ice road which was open for only a short time this year. 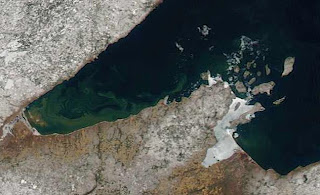 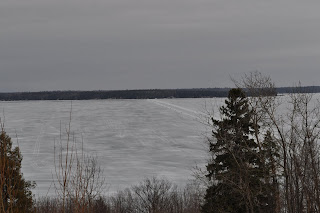 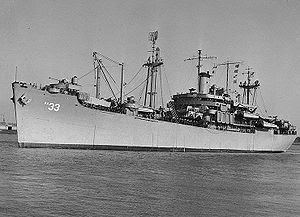 A effort to increase tourism the USS Bayfield will visit Bayfield this summer. The Mayor announced this today stating a larger city dock will have to be constructed but that can be used later for the Disney Cruise ship they are planning to have visit Bayfield.

USS Bayfield (APA-33) was a Bayfield-class attack transport built for the United States Navy during World War II, the lead ship in her class. Named for Bayfield County, Wisconsin, she was the only U.S. Naval vessel to bear the name.