Gloomy view of the channel. 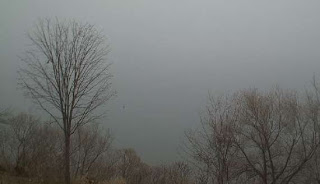 No view today with fog and gloom over the channel and bay. The early spring comes with moisture.
I am very curious what the weather will be this summer after such a odd winter and early spring.
Posted by Bayfieldwis.com No comments: 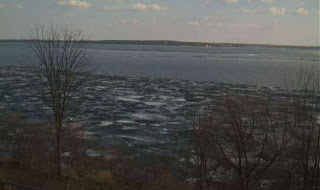 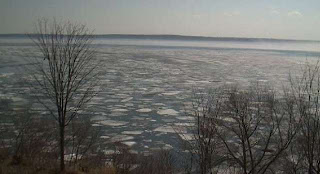 The breakup was in full mode yesterday with ice pancakes in the channel. Chequamegon bay should break up any day now as well. Record temps in the Midwest. Hard on the maple syrup harvesters. The bears are being spotted out of their dens. We shouldn't get too excited it will go back to normal I see later next week.
Or at least more normal as this entire winter can't be called normal. 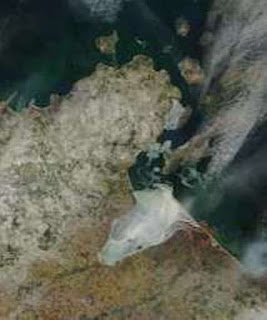 When will the ice go out? Chequamegon Bay ice is still holding. It will likely take some wind to blow it out of the bay. 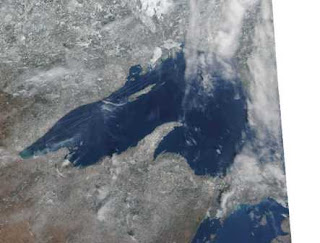 Big money and thousands of jobs? 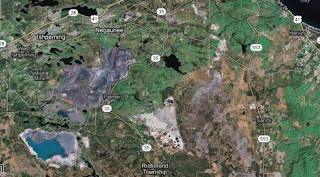 
The promise of big money and thousands of jobs had people drooling. They almost rewrote the environmental laws to get a out of state company to mine in Wisconsin.
Few in Madison voting had even been to the proposed site area I believe. So close to Copper Falls State park and in the Lake Superior watershed. Unemployment is high in Ashland and Iron Counties. Jobs are always needed but at what cost? Our country needs Iron Ore to build cars and make steel for the aging infrastructure of our country. These are tough issues and choices. Above is a picture of a Iron Ore mine and waste lake south of Marquette MI. It’s as ugly as it gets. Does Wisconsin really want this in it’s backyard?Some will say it’s just cut over land after the logging of the past. There is nothing to harm. Others just scream loudly about trout streams, wild rice and the ground water. The divide between the two is huge. But myself I’m happy to say I’m glad it’s not happening.I can’t imagine a open pit mine like that in Wisconsin today. I don’t believe the hype of huge salaries and thousands of jobs. It’s more of the same boom and bust economy. A few good years and they pull out and leave a big mess. Also if you have ever been in the area of mines the water in holding ponds and lakes turns turquoise in color. That is the heavy metals in the water. Fish can’t live in that. I first saw this in Colorado and thought the streams are so blue? Why is that? Mining that’s why I was told.
Posted by Bayfieldwis.com No comments: 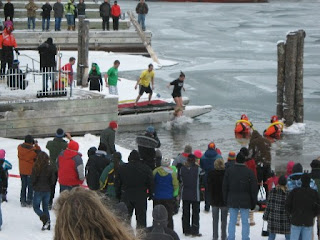 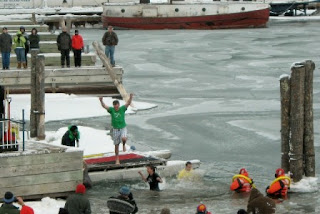 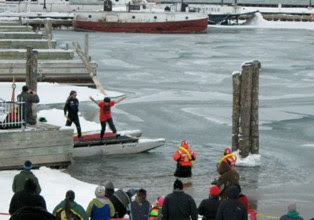 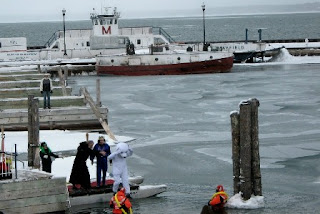 One of the most popular events at the winter festivial is the Polar Plunge. Watching people jump into ice cold water is entertaining.
Posted by Bayfieldwis.com 1 comment:
Newer Posts Older Posts Home