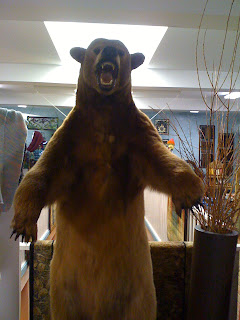 Where is this bear in Bayfield? In the Brownstone shopping center of course! And while it looks brown it's a black bear. Some black bears are brown in color I've read.And the bears are wandering around town. I saw a big Sow with four cubs last weekend which was a real thrill. I've never seen that before. The smallest cub the fourth was a little runt. Hope he makes it,can they run fast. Before I could take a picture they were gone. So you have to take my word for it. There have been reports around the Bayfield area of bears. One up on a deck sniffing around a grill.
Posted by Bayfieldwis.com