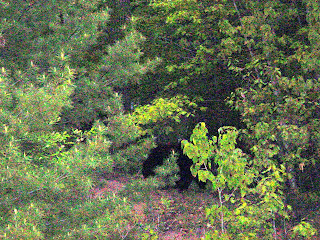 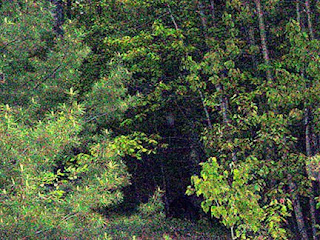 While driving the back roads of Bayfield we spotted a smaller female bear. Rolling up to the bear on the road we watched it along the ditch. It was small perhaps 180lbs?Then we looked a bit to the right of the female bear and there was a much much larger bear which was male. This big male was at least 400lbs or perhaps more? It was very dark but I took a shot anyway. Too dark for the bear to even show in the view screen of the digital camera. Enhanced with Photo shop for brightness you can see(bearly)(pun), a image of the backside of the big bruin walking away into the woods. I said something to the bear from the car and it turned and gave me a stare. I'm not sure if the big boy was curious or he was saying I could crush your girl like SUV?? That was the big adventure.
Posted by Bayfieldwis.com

I hear talk like this all the time at the bar.

I see a big black shawdow.

Bears are hungry.
They are all over in spring after
sleeping all winter.