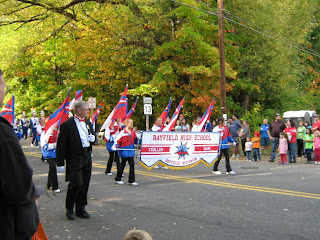 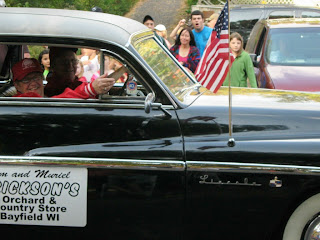 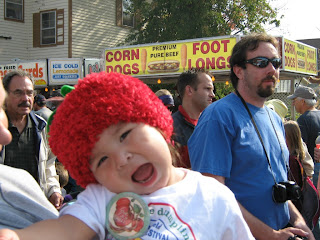 Just a few shots of the Apple Fest Parade:
Posted by Bayfieldwis.com

What a weekend in Bayfield Wisconsin!!!! WOW.....Duluth News on Monday evening reported (via of the Bayfield Mayor) that an estimated 60,000 people attended over the weekend. The parade was a colorful one with 75 units and included 40 of the past 50 Queens of the festival. You have to be there to appreciate all of the variety of events and sights to see. Orchards saw great crowds and apple sales were also "GREAT"!!! That's what it's all about....YUM!!!!

That little "Apple Head" has to be one of the annual members of the adorable "APPLE DUMPLING GANG".....what an adorable idea! There were events and offerings for all ages at the festival. This is a festival that draws people from great distances.....fun of the festival and the awesome beauty of Bayfield and the Apostle Islands. What a great place to live!!!!

Saw the photo of the Ericksons.....Jim was one of the original founders of the festival. For the 50th Anniv. Ed Willet and Cheryl Leah of the Lake Superior Big Top Chautauqua wrote a special song to commemorate the event. It was played at the festival grandstand during the event. The BIg Toppers were a popular draw and pleased the crowd with their fine music all weekend. Great group!!!!

...i think it's a young honeycrisp apple picked from the ground! hmmmm....