We only have to wait nine years! 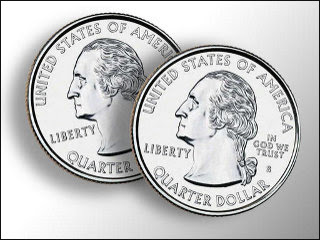 MADISON, Wis. - Gov. Jim Doyle says new quarters minted nine years from now will feature the Apostle Islands. The America's Beautiful National Quarter Dollar Coin Act of 2008 requires the U.S. Mint to issue quarters featuring national sites in each state, the District of Columbia and U.S. territories. The coins will be minted at a rate of five per year and issued on the date in which the landmarks were first established as national sites. The Apostle Island National Lakeshore quarter will be minted in 2018. The Apostle Islands National Lakeshore includes more than 42,000 acres of land, including 22 islands, and 27,000 acres of Lake Superior.